Why Should You Desex Your Cat? Did you know that cats can become pregnant as young as four-months-old and can have on average three litters of kittens a year? Cats are extremely efficient breeders with one unspayed female capable of producing an average of 180 kittens in her lifetime! Sadly, this means that every year thousands of healthy unwanted cats and kittens are euthanized in Australia as a result of owners failing to desex their pets.

Desexing is a simple veterinary procedure which involves the removal of the reproductive organs and whilst it is considered a fairly low risk operation, potential risks may include:

Current myths surrounding desexing include allowing your cat to fall into its first heat, or even have a litter of kittens before spaying, however the supposed health or behavioural benefits of this myth have been widely disproved. It is also a common misconception that indoor cats need not be desexed as they do not have the opportunity to mate. Sadly, many shelters and rescue groups are overflowing with the kittens of accidental pregnancies where the mother managed to slip out of the house or a male sneakily entered the property. Despite the myths around desexing, rest assured that any disadvantages are far outweighed by the benefits.

The Benefits of Desexing

Increased life span – research has shown that desexed cats can live much longer by reducing the risk of diseases such as testicular or ovarian cancer and sexually transmitted diseases.

Reduced annoying behaviour – desexing can stop annoying mating behaviours such as males spraying and females howling when they can come into season. Desexing can also prevent the stress that female cats experience from repeated heat cycles making your cat calmer and happier. 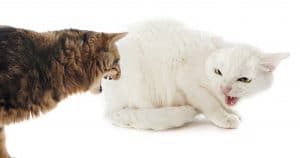 Reduced antisocial behaviour – cats that have been desexed are less likely to roam and therefore avoid traumatic accidents such as being hit by a car. They are also less likely to start fights with other cats which can lead to nasty injuries such as abscesses which result from scratches and bites.

Reduces vet fees – the costs involved with caring for a pregnant or nursing mother and her litter (vet checks, worming, finding new homes for the kittens, not to mention the fees involved if there are complications), far outweighs the cost of a simple veterinary procedure such as desexing.  In addition, the costs of treating injuries caused by roaming or fighting and diseases such as FIV (feline immunodeficiency virus) can be very high indeed.

Protects Australian wildlife – By reducing the number of stray and abandoned cats as well as the number of cats that roam the street in search of a mate, desexing can reduce the risk of cat attacks on native wildlife. 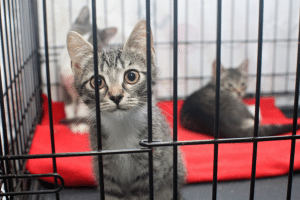 Desexing your cat will not only help reduce the hundreds thousands of unwanted cats and kittens that are abandoned every year, it will also have positive effects on your cats health and behaviour.

July is NATIONAL DESEXING MONTH with many veterinary practices offering low cost desexing before the breeding season starts, so speak to your local vet today!