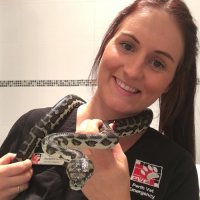 Katie Speer grew up on a little farm and was surrounded by an array of animals from a very young age. The menagerie included her family dog Sandy and over the years came horses, cows, chickens, sheep and birds. Katie says that she doesn’t ever recall a time where she chose her career as a Veterinary Nurse, but is sometimes reminded by her parents of when they first realised she was to one day work with animals.

“I was about two years old when we started planting trees at the farm. A little grommet covered in dirt that thought life couldn’t get any better, until her Dad uncovered girls best friend. It wasn’t a diamond though, it was a worm. A giant monster worm that witnesses recall being approximately 30 centimeters long. It was a good long hour of friendship that followed before tragedy struck – carrying around Mr. Worm caused elongated abdominal distension (not an actual scientific term) and there were now two of him. It was hours before I stopped crying. My parents thoughts were confirmed about a year later when I disappeared from my aunt’s house with a frog I found in her birdbath. I had walked home with my new friend and was in the process of brushing its teeth (with MY toothbrush!) when my parents walked in on me. That was the day I found out frogs don’t actually have teeth.”

Katie’s career began after completing a week of work experience at the local Brighton Vet. Five years later it was time to move on. Obtaining a position at a much larger clinic is where Katie found her calling with Emergency and Critical Care and her love of wildlife took off!

“Everything about being an Emergency and Critical Care Nurse reminds me that I am exactly where I am meant to be. Supporting animals and their humans when they need someone the most and being a part of nursing critical care patients. Those are the ones that, when they are finally well enough to go home, make you so proud of what you do.”

Katie loves working at Perth Vet Emergency because of her incredibly passionate colleagues. “Never have I seen a better quality of medicine and care anywhere. I thank my lucky stars that I am able to work in a place where I get along so well with everyone, where I learn something new every day and above all, I am in a place where I know I’m making a real difference.”

Katie has completed a Certificate IV in Veterinary Nursing and is in the process completing a Diploma in Emergency and Critical Care. She also volunteers to care for wildlife and works closely alongside the Northern Valleys Wildlife Support team to give those animals without humans, care.

In her spare time, Katie enjoys motorbike riding, four-wheel driving and camping. She’s up for anything adrenaline fuelled or fast.

Her pets include a beautiful rescue dog named Jazz, who is a black and white Kelpie that enjoys playing fetch and riding shotgun on the farm bike. Katie also shares her bedroom with a South West Carpet Python called Ivy, who she credits with giving the best hugs! Only recently she has said goodbye to three of her orphan kangaroo joeys after months of hand raising, as they make their way back out into the wild.