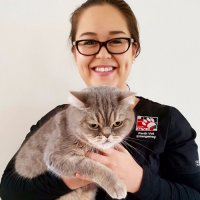 Just like many vets, Dr Penny Seet decided at a young age that being a veterinarian was exactly what she wanted to do. She was furious her parents wouldn’t let her have a menagerie of baby animals to raise in the middle of suburban Melbourne but that didn’t hold her back.

Penny worked in general practice before moving back to emergency medicine in 2009 and she’s never looked back. Her area of interest includes Feline and Neonatal Medicine.

When asked why she loves working at Perth Vet Emergency, Penny’s response came easily. “I was lucky enough to find a job working with an amazing group of like-minded people who believe we can make a real difference to pets and their families after hours.”

Penny completed Memberships to the ANZCVS in Veterinary Emergency and Critical Care in 2011 and Medicine of Cats in 2014. She is a Senior Veterinarian at Perth Vet Emergency and mentors for ASAVA New Graduates.

In her spare time Penny enjoys the Perth sunshine while spending time with family and friends. While she didn’t have a menagerie growing up, she’s certainly making up for it these days. Her furbabies include “Shogun, a Labrador who has had both his cruciates repaired. There’s ˜Wally a Miniature Schnauzer who has already had surgery for an intestinal foreign body followed by near misses where he, fortunately, vomited the foreign body up.” Possum is a Persian Cross “who has the flattest face in the West”, and there’s ˜Bella a British Shorthair who was adopted from a shelter and would love to be a blood donor as she is a rare Type B, but she never grew big enough to donate.”