Congratulations… It’s a.. burger! Ever been ‘expecting’… a food baby? Stuffing our faces full of delicious cuisine is one of the greatest joys in life. Aside from a little bloating, gas and discomfort, humans are relatively okay from the odd overindulging and can often sleep off their ‘food coma’. Canines however, do not have the same ability. For dogs, going on a food binge, ‘as sick as a dog’ rings true, and it can get life threatening very quickly. Accidentally leaving the doggy biscuit lid loose, or out near a forever hungry and always scavenging snout, will only end one way… an empty container (potentially a partially eaten packet too!), and a sad, uncomfortable, bloated dog. Although all dogs LOVE to eat, this can be more common with certain breeds (looking at you, Beagles and Labradors) who don’t appear to have a ‘full switch’. They can and will, eat.. and eat.. and eat. And then eat some more!

When a dog eats too much or too fast (or more likely both), gas accumulates rapidly, causing the stomach to swell up like a balloon. This can result in an often irreparable twisting of the stomach, affecting circulation and killing stomach tissue. If doggy biscuits were the binge food in question, the scenario gets much worse as kibble expands when combined with stomach acid, causing extreme swelling. If double swelling isn’t bad enough, the wetter the dry food becomes, the heavier it gets, making it increasingly harder to vomit back up. 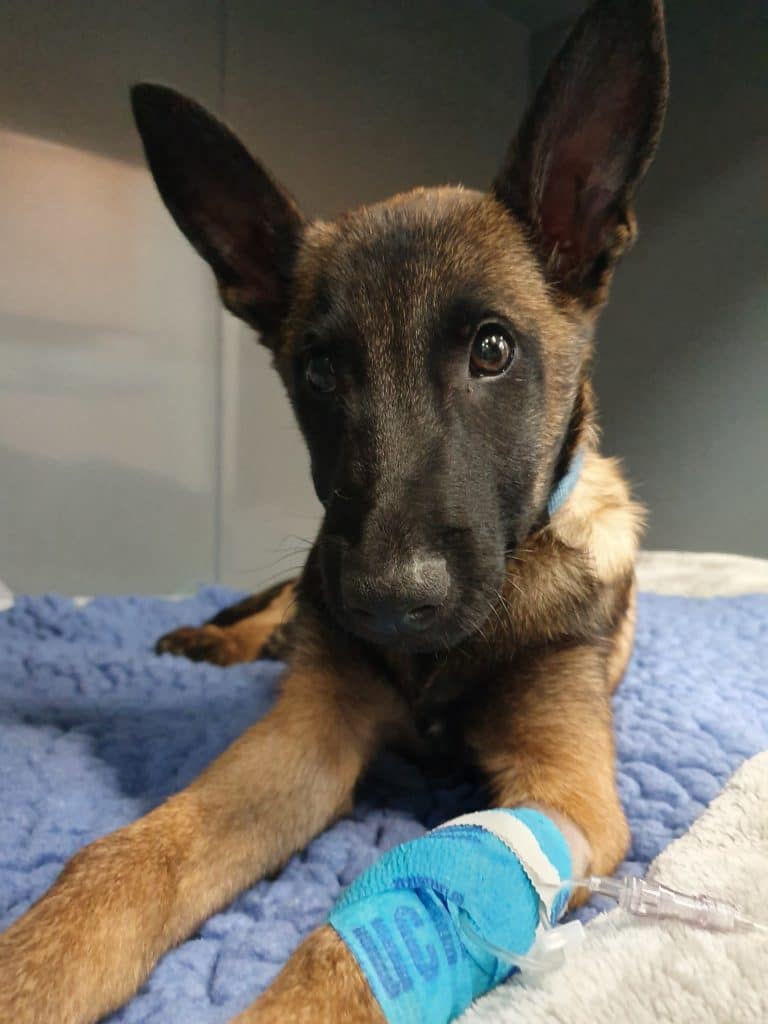 It was doggy business as usual for beautiful 12 week old Belgian Malinois Mac, happily chowing down on his dinner like normal. Soon after, however, fur-dad Michael found multiple vomits containing undigested biscuits… followed shortly after by the discovery of a torn up dog biscuit packet. After a vet trip unsuccessfully induced further vomiting, and he began to cry, a distressed Mac and his sore expanding tummy arrived to us.

After x-rays, Dr Astrid diagnosed Mac with food bloat and overnight supportive care was provided in the form of pain relief, intravenous fluids and anti-nausea medication. After passing enough faeces to fertilise a small farm, Mac felt much happier and went home the next morning. To his dismay, the doggy biscuits now live out of his reach. Food bloat can kill your dog. These are the symptoms to look out for: