Meet Charlie, the corn cob thief! After stealing one of his neighbour’s corn cobs, Charlie was so excited he wolfed it down whole.

Whilst it makes a corny story; eating a large object such as a corn cob poses a serious foreign body risk. Due to their large size they often cannot move from the stomach to intestines or get stuck in the small intestine. Either way, this requires major abdominal surgery. If left untreated it can cause severe intestinal damage which can ultimately be fatal.

Charlie arrived at Perth Vet Emergency in a world of pain. After assessment Dr Steph decided to give him special medication designed to induce vomiting, in the hopes that he would bring up the corn cob on his own. Thankfully Charlie did! However not all dogs are so lucky.

Dogs can pass some weird and interesting things but corn cobs are not one of them. Corn kernels alone are a healthy snack, but much to your pup’s disappointment the cobs are not recommended for dogs as they tend to use them as more of a chew toy, often swallowing them whole, and leading to intestinal obstruction. 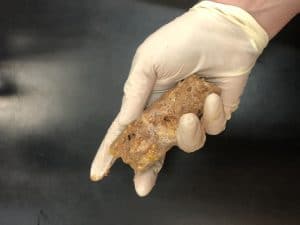 If you fear your dog has swallowed a corn cob, please contact your nearest veterinary clinic or Animal Emergency.