Lucky The Golden Retriever Was Lucky

Lucky the 6 year old Golden Retriever was lucky indeed. His owners were out one Saturday and returned late afternoon to find a packet of Mars Bars completely empty. They were pretty sure they knew who the culprit was and Lucky wasn’t very good at covering his crime. He had remnants of Mars Bar wrappers stuck to his feet. 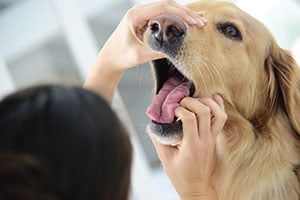 Due to it being the weekend, Lucky’s veterinarian was closed so his owners presented him to Perth Vet Emergency because they were wise enough to know chocolate was bad for dogs. Especially knowing there were 12 missing Mars Bars.

Dr Stephanie Pattison examined Lucky and discussed his medical history with his humans. His pulse and respiratory rate were normal and there were no other significant findings. He was still bright and responsive with no notable neurological or heart rate issues so he wasn’t experiencing any complications associated to chocolate toxicity. In fact, Lucky looked pretty pleased with himself and was certainly not aware of the dangers associated to his misdemeanour.

Chocolate contains a compound called theobromine that is toxic to dogs and cats. The darker the chocolate, the more theobromine is present causing a hazard. This chemical affects the brain, nerves, heart and gastrointestinal tract and is very toxic in large doses. Dark chocolate, bakers’ chocolate and cocoa powder cause the most concern.

If you suspect your pet has consumed chocolate, or you suspect they are acting strangely, you must seek immediate veterinary attention. We often see pets present with excessive thirst, hyperactivity, lack of coordination, vomiting or diarrhoea. Serious presentations have tremors, seizures, a racing or abnormal heart rhythm, or they’re collapsed. Chocolate toxicity can be very serious and you can read more about the clinical signs and treatment of this condition in this PVE article.

Lucky was ‘lucky’. His owners found him within a few hours of him eating the pack of Mars Bars and rushed him straight to the PVE Veterinary Team. Dr Pattison had two challenges with this beautiful boy. The first was the obvious being Chocolate Toxicity. The second was the possibility of an intestinal blockage due to the missing wrappers. Dr Pattison recommended emesis (induction of vomiting using a medication). 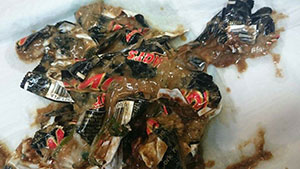 With approval received, Apomorphine was given and within minutes, Lucky was bringing up his stomach contents. A nurse was with him through the process and she had the ‘lucky’ job of counting the number of wrappers produced in his vomit. This may be crazy to believe, but the nursing team shared a round of High-5s when all 12 wrappers were counted. That’s what it takes to be an Emergency & Critical Care Vet Nurse. They’re an extraordinary group of people and their celebration that Lucky didn’t have to be admitted for treatment far outweighed the job at hand.

Within the hour, Lucky was given the all clear to return home with his family. Dr Pattison discussed the treatment and symptoms to watch for over the coming days. Lucky’s owners found comfort knowing the PVE team were available 24-hours through the weekend, until his GP returned. His owners also received a medical report outlining this discussion with a full clinical report emailed to his regular veterinarian for their records. Lucky was diagnosed a bland diet of boiled chicken and rice for 3 to 4 days with no exercise for 5 days. A check-up was also required at his vet practice on Monday morning to ensure he was still in good health after the ordeal.

Lucky’s story is a best case scenario. We hope all our patients who present with chocolate toxicity have this result but sadly that is not always the case. Pets can deteriorate after treatment if the toxin has taken effect. They can become flat or lethargic, go off their food and water, develop vomiting, diarrhoea, tremoring or commence having seizures. Heart issues are also a concern which is the reason Lucky was rested for several days after presentation even though he didn’t show symptoms.

If you suspect your pet has eaten chocolate, seek veterinary attention. Perth Vet Emergency is available when your veterinarian is closed – EVERY night, EVERY weekend and EVERY public holiday. Where possible, take samples of remaining packets with you so veterinarians can identify the level of theobromine toxicity.