What to do if your dogâ€™s penis canâ€™t retract

It’s a topic we receive many phonecalls about and one which leaves many male owners crossing their legs. Paraphimosis is the clinical term for when a dog isn’t able to retract their penis back in to the sheath. This condition can be seen in male dogs and cats of any age though we see more presentations of dogs experiencing this unfortunate ailment. 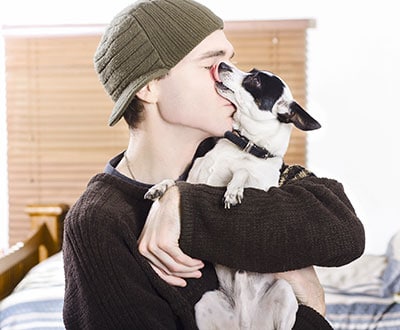 In most occasions, the dog’s owner notices their pet licking profusely at their penis, or finds they are having difficulty urinating. When this occurs over a long period, fluid accumulates in the tissues causing redness and swelling in the area.

This is often caused when the dog’s orifice is not able to retract the penis. It may be due to swelling or from hairs (or other foreign bodies) obstructing the penis. In other instances, it may be caused by a neurological disease or the result of other medical conditions which have not been diagnosed.

Markus, a 6 month old puppy, presented to Perth Vet Emergency in July 2016. His owners were away on holiday and his carers noticed his penis had been extended for 2 hours. He appeared agitated and in pain so they presented him for veterinary help.

Dr Cubbage examined Markus and noted his penis and could not aid in retraction without causing him further discomfort. She recommended sedation while he was rehydrated with lubrication to assist the process. Markus was admitted to hospital where his penis was flushed with saline to ensure there were no obstructions during the procedure. He required hypertonic saline, fluids, and medication to soften the soft tissue oedema (swelling) which had no success. Dr Cubbage had to then create 2x 2cm incisions in the prepuce to allow it to be advanced over the penis. A loose suture was then placed in the openings to allow for extrusion again without a repeat occurrence.

Markus was ready to be discharged from hospital once recovering from the anaesthetic. His carers were given antibiotics and pain medication and instructed to schedule an appointment with his GP the next day to ensure the site was healing well. His only complaint upon returning home was the Elizabethan Collar he was required to wear at all times until given the all clear by his GP.

A full report was forwarded to Markus’ GP outlining his procedure and all medication provided. The benefit of visiting PVE is that his carer’s had access to PVE staff through the night if they had any questions or concerns. This service was available until his GP opened the next morning.

If you find your pet isn’t able to retract their penis, you can attempt assisting the process by using KY Jelly as a lubricant (easily purchased from a pharmacy) while manually guiding the sheath back over the penis. Be gentle! If you struggle fixing the condition, or if the problem recurs, seek veterinary help as you may cause more pain, or damage to the prepuce (sheath) or penis itself.