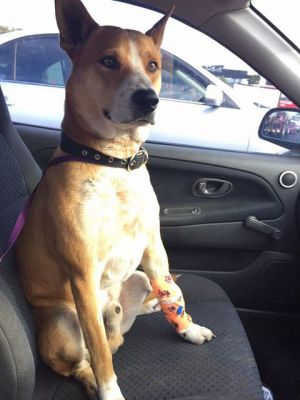 Buddha, a 5 year old Red Heeler cross is a gorgeous boy who had always been in good health without concern. One Monday morning in January 2016, Buddha’s owner noticed he was “wobbly”. He was eating and drinking as normal, there were no changes to his urine and no detection of vomiting or diarrhoea. The only noticeable concern was his wobbliness, so he was off to see his veterinarian at Midland Veterinary Hospital for a check-up.

Buddha received a thorough examination and diagnosed with kidney illness, though the cause was unknown. He was placed on intravenous fluid therapy in preparation for tests to examine the performance of his kidneys. The first is a Blood Urea Nitrogen (BUN) test which examines the levels of by-products the kidney removes from blood and excretes via urine. If the kidneys are not working adequately, these by-products build up in the blood causing severe illness. The second is a Creatinine test which measures the filtration rate of the kidneys. The kidneys are the only organ that excrete creatinine so regular tests are taken to measure if the organ is improving or deteriorating.

Kidney failure is a serious condition to watch for in dogs and cats, especially those who are senior. There are many symptoms for kidney failure which are not specific to this organ, so quite often a patient is critical by the time they are diagnosed and treatment commences. Kidney failure, also known as renal failure, does not improve without treatment. More symptoms appear as the pet deteriorates. There are many causes such as ingesting toxic substances, dental disease, or it could be hereditary. Read more about the causes and symptoms of Kidney Failure. 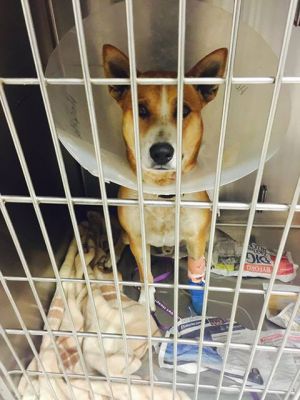 Buddha spent his days hospitalised at Midland Veterinary Hospital and transferred to Perth Vet Emergency for overnight care. PVE veterinarian Dr Lovatt explains, “When the creatinine level plateaus we can potentially commence weaning the fluid therapy. It is a very gradual process that takes days, sometimes weeks, of hospitalisation. This is because the patient’s results fluctuate resulting in their fluids being increased and decreased in response to their kidney function. Buddha also had to be monitored closely because we didn’t know the definitive cause of Buddha’s kidney injury so we had to be alert for secondary injuries or flares of whatever had caused the problem initially.”

By Wednesday evening, after 3-days of intensive fluid therapy, Buddha’s creatinine levels appeared to be plateauing. This good news was shared with his owner with advice that the reduction in fluid therapy would commence in the morning as long as the levels didn’t show an increase overnight. By Thursday morning, Buddha was ready for his fluids to be reduced. As Dr Lovatt mentioned, “This is a gradual process” with fluids being reduced by 20% every 12-24 hours to ensure the kidneys are able to function appropriately. Weaning a patient off the supportive therapy too fast could damage the kidneys or other organs and regular tests are necessary to ensure they are showing a steady improvement in health. 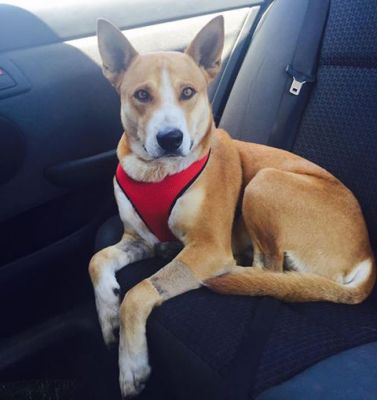 Gorgeous little Buddha made a stellar recovery. His creatinine levels continued to decrease as his fluids were gradually reduced and he was on track to cease all fluids by Saturday evening (6-days after the start of his ordeal). By Sunday morning, Buddha had remained off fluids with no increase in his levels proving his kidneys had recovered well. He was eating, drinking, urinating and showing no signs of ill health. He was discharged for home care with instruction to visit his vets at Midland Veterinary Hospital for a recheck of his creatinine levels within 24-hours.

Buddha is one very lucky canine with an attentive owner to thank. Treatment for kidney failure rarely goes as smoothly as Buddha’s but the early detection and veterinary response to his “wobbliness” saved him a lengthy hospital stay that in some instances lasts many weeks.

His recovery was also aided by the coordinated efforts between Perth Vet Emergency (after hours) and his primary care veterinarians at Midland Veterinary Hospital. We’re happy to report Buddha has made a complete recovery with no further kidney issues since his visit in January.

“This is Buddah. He came in January from kidney failure and I still cant say thank you enough for saving him. He made a full recovery and continues to make us happy each and every day