The Danger Of GDV Or Bloat In Dogs (what is it, symptoms, and treatment)

Stomach bloat in dogs, otherwise known as GDV, is a serious condition many dogs can develop. And without treatment, this common condition can quickly worsen and become fatal. But what is stomach bloat and how can you tell if your dog has it? We’ve broken down everything you need to know about bloat in dogs.

What is stomach bloat in dogs?

Stomach bloat’s official medical term is Gastric Dilation and Volvulus, but is also known as stomach torsion and or twisted stomach, is when the stomach distends and twists. It happens when gas, liquid, or food fills the stomach causing it to swell. The stomach then twists 180 to 360 degrees, this is referred to as volvulus. This twisting disrupts the blood flow to internal organs, including the stomach and spleen, by pressing the distended stomach onto large blood vessels.

Bloat can cause dogs to go into shock quickly. Their breathing can also be affected as the swelling of the stomach can limit the movement of the chest.

What causes stomach bloat in dogs?

It is still unknown why bloat happens. However, there are factors that can increase the risk of bloat developing, such as:

Research is currently underway to better understand stomach bloat in dogs, including what happens physiologically for GDV to develop. Mach visited us and was diagnosed with bloat in dogs.

For dogs, going on a food binge, ‘as sick as a dog’ rings true, and it can get life-threatening very quickly. Accidentally leaving the doggy biscuit lid loose, or out near a forever hungry and always scavenging snout, will only end one way… an empty container (potentially a partially eaten packet too!), and a sad, uncomfortable, bloated dog.

It was doggy business as usual for beautiful 12 week old Belgian Malinois Mac (pictured), happily chowing down on his dinner like normal. Soon after, however, fur-dad Michael found multiple vomits containing undigested biscuits, followed shortly after by the discovery of a torn-up dog biscuit packet. After a vet trip unsuccessfully induced further vomiting, and he began to cry, a distressed Mac and his sore expanding tummy arrived at our hospital.

From x-rays, Dr Astrid diagnosed Mac with food bloat, and overnight supportive care was provided in the form of pain relief, intravenous fluids, and anti-nausea medication. After passing enough faeces to fertilise a small farm, Mac felt much happier and went home the next morning. To his dismay, the doggy biscuits now live out of his reach.

Can dogs be predisposed to GDV?

GDV affects dogs of all sizes and breeds, although it is more prevalent in certain breeds than others. Large, deep, narrow-chest dogs such as Great Danes, Shepards, Weimeraners, and Dobermans are more likely to develop bloat. While extremely rare, GDV can affect smaller dogs too.

What are the symptoms of bloat in dogs?

GDV has many signs and symptoms, some obvious while others aren’t. The more obvious symptoms of bloat in dogs are:

Twisted stomach in dogs is a serious condition that requires immediate treatment. Without treatment, the condition can become fatal within an hour. More than 80% of dogs will survive if treated promptly.

There are other reasons our pets can develop bloated stomachs, including pregnancy, cancer, and infection. These are also serious conditions that need prompt veterinary treatment.

What is the treatment for GDV?

As soon as you arrive at your veterinarian, your pet will be examined. The first step is x-rays (radiographs) to determine if their stomach is merely dilated or if it is also twisted. Immediate emergency surgery is the only treatment option if the stomach is twisted.

Most dogs with GDV go into shock, to treat this fluids will be given. This is also a very painful condition, so pain relief is given right away.

Your vet will relieve the pressure that has built up in their stomach by passing a stomach tube or inserting a large needle into the stomach to release the gas. This will improve their blood flow and help keep them stable before surgery.

The surgery for dogs with GDV is challenging and complex, needing close anaesthesia monitoring and multiple medications. As well as untwisting the stomach, during the surgery your vet will inspect the surrounding organs for any damage. Your vet will also perform a procedure called gastropexy, which involves stitching the stomach to the inside of the abdominal wall to prevent future twisting.

Your pet will be closely observed for several days after surgery for signs of infection, heart problems, stomach ulcers or perforations, and pancreas and liver damage. Antibiotics and additional medications may also be required.

Some dogs with bloat can develop a bleeding disorder called disseminated intravascular coagulation (DIC). This is when small clots form in the blood vessels. This is potentially fatal and must be treated by a pet intensive care unit.

During your dog’s treatment, their heart rate and rhythm will be closely monitored, as some dogs with bloat can develop heart arrhythmias. Dogs with existing heart issues will most likely be given medicines to help manage their condition.

Can you prevent bloat?

There are measures you can implement to decrease the chance of your dog developing bloat, including:

If you are concerned about stomach bloat and the risk to your pet, see your local vet for a health check-up and to talk through any concerns.

If your pet is ill or injured, visit Perth Vet Emergency or your local veterinarian immediately. 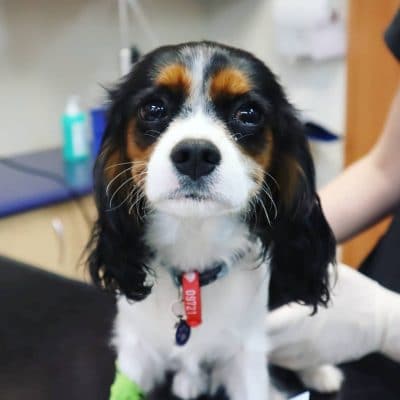