The Dog Ate My Knickers 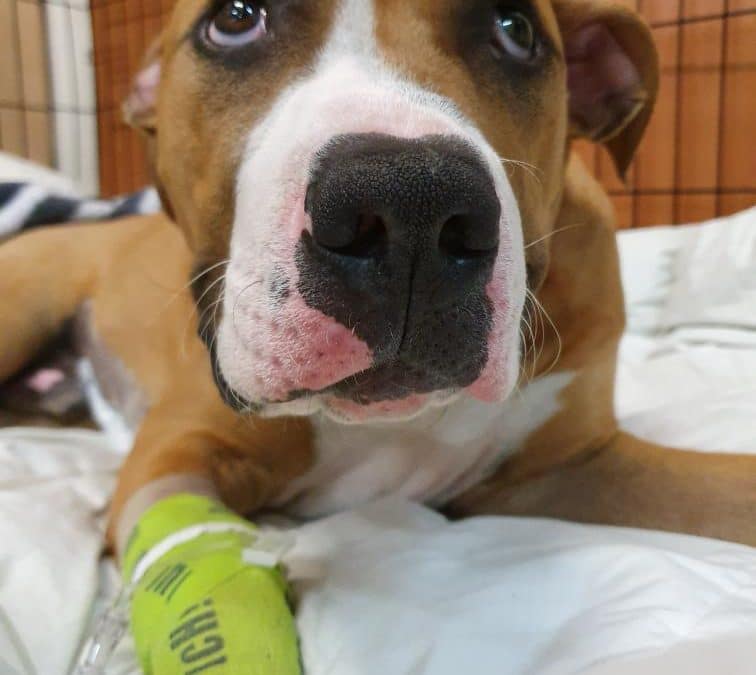 As it turns out “the dog ate my homework” is a fairly plausible scenario for an excuse. We see all sorts of weird and downright wacky non-digestible items consumed by dogs from socks, leather and balls, to diamonds and nails. In the case of Mack James, it gets even wackier… two rather expensive pairs of knickers!

7-month-old Staffordshire Bull Terrier Cross, Mack, had a long history of chewing clothing around the house. His preferred material snack were socks. This had not been of much concern as he would usually bring them back up by vomiting or passing in his faeces. One night he didn’t get so lucky when he vomited immediately after dinner, with no undies to be seen. Mack willingly ate a second serve of food offered by his owner Ellen (who at this stage was none the wiser) but then vomited shortly after this as well (again, no undies). When Mack vomited a third time Ellen became worried and immediately rushed him to us.

With Mack’s long-term history of foreign material ingestion and sock munching, Dr Hayley admitted him to PVE for diagnostics. From the physical exam, it was clear he was extremely sore when pressing on a focal spot on his stomach. Radiographs were performed, uncovering a large foreign object that looked to be obstructing his intestine. The foreign material was found in his stomach and was luckily able to be removed with gastrostomy surgery.

The Foreign Object: Two Pairs of Underwear Twisted Together

It can be tricky to know whether your pet has swallowed something they shouldn’t. Dogs can often bring non-digestible items up on their own, either by vomiting, or they may pass them. Vomiting once is common, however, this becomes a cause for concern if it continues. If in any doubt contact your local vet or Perth Vet Emergency immediately, especially if it is a sharp or large object.

Mack recovered well after his surgery and went home the next morning when he was bright and eating. Thankfully his owner had brought him in early enough that the intestine didn’t suffer any bruising. Ellen is now finding new places to hide her clothing!