Kaizer’s rocky start to the year

Kaizer the super cute Shar-Pei has suffered a rather ‘rocky’ start to the year, after his owners flew back from an overseas holiday to Dubai to find their dog rather ill. The 4-year old pup, known to be a sneaky scavenger, had a history of eating food scraps left over from his best friend (a one-year old baby!), as well as an odd habit of eating small rocks from the backyard. Upon arriving home from their holiday Kaizer appeared normal, however, his owner noticed that he had vomited up liquid and some grass.

Knowing Kaizer’s pattern of eating anything and everything he can get his paws on, his owners quickly arranged a visit to Perth Vet Emergency’s 24-hour practice to determine the cause of his problem. Upon visiting the hospital, Dr Stephanie gave the cute Kaizer a once-over and found he was dehydrated, recommending x-rays and an ultrasound to find out just what was wrong with his tummy.

After prepping Kaizer for the ultrasound and giving him plenty of love and pats, the PVE team found over 15 long oblong shaped objects in Kaizer’s colon and small intestinal tract! X-rays also showed a corn cob stuck in his small intestine. Kaizer was exhibiting signs of vomiting, anorexia, dehydration, and the potential for a blockage in his gastrointestinal tract, meaning he would not be able to eat or pass any food. Untreated, this can cause fatal sepsis from perforation of the intestinal tract – urgent surgery was needed. Dr Stephanie spoke to the owners and advised them of Kaizer’s predicament. Kaizer had a general anaesthetic and surgery to remove the corn cob, along with performing an enema (warm water used to remove the multiple stones from his colon).

Dr Carole and the Nursing Team looked after Kaizer overnight, monitoring him to ensure he was not exhibiting complications from his surgery. Recovering well from the anaesthetic, Kaizer slowly began to feel like himself again – more alert and responsive to team members who came in to see how he was doing. Although bruised and battered at the site of the obstruction, Kaizer started to eat again.

Surgery to the intestines takes weeks to heal, especially if a foreign body such as a corn cob was present, causing bruising and damage to the intestinal wall. As a result, Kaizer’s owners were given strict instructions to keep him rested, and much to Kaizer’s disgust – bland food (although one would have thought eating rocks would be blander!), and he was taken back home to roam the backyard once again.

If you recognise any symptoms in your pets such as vomiting and diarrhoea, head to your nearest veterinarian for a full assessment – sneaky scavengers often make the inedible, edible!

Given that the majority of human parents are away from their fur babies most of the time, it can become increasingly hard to know what a pet may have consumed. Here are a few practical tips on how to minimise the harm of consumption for your pets while you’re away from home. 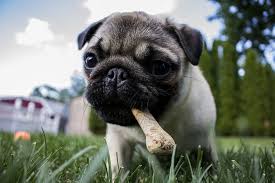