Hand sanitiser is now a commonplace household item found in homes, cars, handbags, and offices. While hand sanitiser is great at killing germs there is a lot of misinformation around its potential danger to pets. Having the right information is essential when the increased availability of sanitiser means pets are more likely to gain access to bottles and ingest the contents. We have broken down everything owners need to know about hand sanitiser should pets get their paws on it – from licking hands after use to ingesting an entire bottle.

Why is hand sanitiser toxic to pets?

Ethanol. Ethanol is a type of alcohol also known as ethyl alcohol that can be found naturally in fermenting foods but is also used in various products, including hand sanitiser. Ethanol is the component in sanitiser that kills germs and makes up anywhere from 60% to 95% of the contents in each bottle. Ethanol and other alcohols are toxic to animals, especially to our cats and dogs. Although hand sanitiser is typically unpalatable for animals, if a medium-sized dog were to consume an entire bottle they would get severe alcohol poisoning and require urgent care.

What happens to my pet if they lick my hand after I use hand sanitiser? 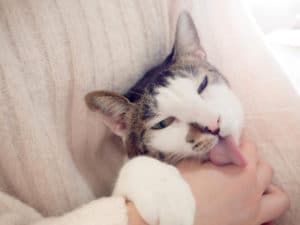 If your pet licks your hand after you’ve used hand sanitiser the amount they would ingest is not enough to pose a risk.

Nothing. The amount of hand sanitiser on hands after use is not enough to pose any risk to pets even if they were to lick the entire hand. Nor is there any reason to worry about animals grooming themselves after you pet them as the trace amounts of the sanitiser transferred by your hand to their body is even less than them licking hands directly.

However, if you are still concerned about the use of hand sanitiser around your pet, try washing your hands instead. The Centers for Disease Control and Prevention advise that washing hands with soap for 20 seconds is more effective at removing certain germs than hand sanitiser.

How do you know if your pet has been poisoned? (signs and symptoms)

Hand sanitiser/alcohol poisoning in pets has several signs and symptoms depending on the amount ingested. The more volume consumed by an animal the more severe their symptoms will be, and if not treated promptly can result in death.

The first signs and symptoms of poisoning are:

These progress to moderate symptoms, including:

Progressing or immediately resulting in severe symptoms such as:

What actions need to be taken if a pet has been poisoned? 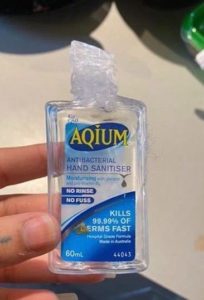 A bottle of hand sanitiser chewed by a three-year-old Samoyed who developed alcohol poisoning from ingesting the contents.

If your pet is showing the above signs or you believe they have hand sanitiser/alcohol poisoning, immediately contact your local vet or us at Perth Vet Emergency. If required, you’ll be instructed on how to stabilise your pet for transport to the clinic where they will be prepared for your arrival. Ensure to bring any packaging of the item your pet has ingested so the attending vet can better diagnose and treat the symptoms.

Most pets will recover from hand sanitiser/alcohol poisoning with recovery time dependent on the severity of the poisoning and the speed at which they receive treatment.

What is the best way to prevent hand sanitiser poisoning?

Keep hand sanitiser out of reach. Placing hand sanitiser in cupboards, encloser containers or stored in hard to reach locations will reduce the likelihood of your pet accidentally ingesting the sanitiser.

Disclosure
The content in this article has been reviewed by a certified veterinarian to ensure all details are accurate. All information provided is general advice only. Please talk to your local veterinarian for individualised instruction.