One Thursday evening in July, an adorable possum was found in Caversham Wildlife Park. He had an abscess on the side of his face and appeared very malnourished and dehydrated. With the park Veterinarian away on leave, Perth Vet Emergency became the next point of call to tend to this little possum’s needs. 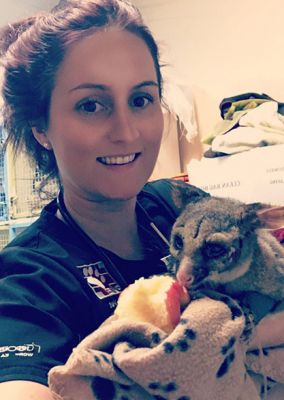 A blood sample was obtained and tested using our in-house electrolyte machine, alerting us to a blood glucose of 1.1. This incredibly low reading proving he was indeed very malnourished and needed swift intervention of IV fluids and glucose supplementation. The PVE emergency team placed an IV catheter and commenced treatment to bring his blood glucose reading back to an acceptable number.

The abscess on his face was cleaned and antibiotics were administered to treat the infection. He was then put in a warm, quiet bed away from the other patients to recover from his ordeal and offered some apple, to which he tucked into without a moment of hesitation. HOORAY!

The next morning, he was discharged back into the capable hands of the wildlife carers at Caversham Wildlife Park. When he is deemed strong enough, he’ll be released back into the park so he can catch up with his fellow possum buddies and hopefully live a long and happy life.

The inserted photo of Veterinary Nurse Katie Speer and the little guy was snapped during a quick bedding change. Due to being nocturnal, we ensured his exposure to light was brief and he was returned to a warm, dark, quiet bed in the speediest manner.