Your pet is your best mate. So it makes sense to ensure they’re safely secured when they come along for a drive in your car or ute. However the sad reality is, few owners take precautions for their pet’s safety and we treat patients of car accidents more often than we want to. 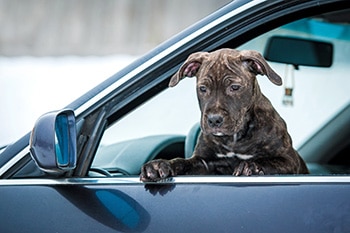 Milly is an adorable Staffy who presented to PVE one Saturday afternoon after an unfortunate event. Her day started out well. She woke up and had breakfast as usual, which then followed with a walk to pick up the weekend paper. The day wasn’t any different to any other day. As a matter of fact, it was a lovely May day in Perth.

As always, Milly jumped in the back of the sedan and took her seat in the middle. She wasn’t crated or attached to her seatbelt but this didn’t matter because she was always well behaved on drives, happy to sit quietly in the middle without causing distraction.

Along the way, Milly’s owner stopped for fuel and picked up some mail from the local post office. She didn’t move from her spot and was happy to be out with her human for the day. However, along the way, Milly’s owner came to a set of lights. They were red on approach but turned green before the vehicle was anywhere near the intersection. Milly’s owner continued through. There were no vehicles ahead and the lights were in their favour so they continued on their journey.

But fate had a different journey in mind.

As they entered the intersection, another vehicle dashed through a red light at the last minute striking their vehicle at the front passenger’s door. The airbags engaged and the advanced braking and traction system got working to ensure the passengers within the car saw little injury. However, Milly’s wellbeing had not been planned and she was not secured. Her 6yr old frame was tossed around the back seat and as the vehicle came to a halt, her 27kg frame was thrown to the front of the vehicle and through the front windscreen.

Milly’s owner came to his sense without injury and quickly realised his best friend was lying on the bitumen in front of him. Everyone involved was without injury but Milly was lifeless just metres in front of her human’s car. She was quickly scooped up by a by-stander and rushed to Perth Vet Emergency for treatment. On presentation, her gums were pale and she was lifeless. She was rushed straight to the treatment area where a veterinarian stabilised her and made a list of tests and treatment options to save her life.

Fortunately for Milly, her injuries weren’t anywhere near what you’d expect having been thrown through the windscreen of a vehicle resulting from an accident. She stabilised quickly and with a lot of TLC, her leg fracture was treated while she lapped up the loving attention she received from the medical team.

She was ready to go home within 24hrs of the ordeal. Milly was very, very lucky.

This is an example of why it is vital you ensure pets are restrained in vehicles. Veterinarians and pet shop suppliers have an array of restraints available for purchase. These can be installed crates or seat belt attachments. You can never predict when you’ll be in an accident but you can help ensure your pet’s safety if this was ever to occur.

WA legislation doesn’t specifically reference rules when transporting a pet. However, under the Animal Welfare Act 2002, persons are prohibited from transporting an animal in a way that will likely cause them harm or is inappropriate to the animal’s welfare. Rules like this are of significant importance. It’s vital we buckle up in the front, buckle up in the back, and buckle up our loved pets too. 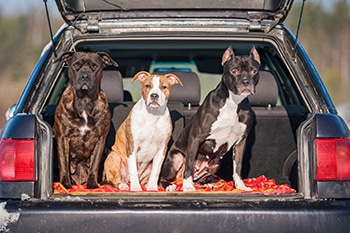