Rodenticide is very toxic for pets as well as rats 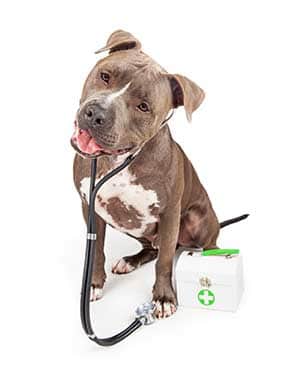 Bernie, a 4 year old Staffordshire Bull Terrier’s owners noticed he was a little quiet while playing in the yard. They decided to check on him and found him looking guilty with a rat bait package hanging from his mouth. They had previously experienced Rat Bait poisoning with Bernie and rushed him straight to Perth Vet Emergency on Saturday afternoon in July 2016 for treatment.

During consultation, Dr Pattison noticed Bernie’s owners were beside themselves. Having experienced this scenario before, they were upset they had allowed the situation to occur again and didn’t believe they had any other traces of rat bait on the property. As Dr Pattison explained, this product is specifically designed to be delicious in order to encourage rats to consume it. Dogs are inquisitive and have a very strong sense of smell so it was just a matter of time before Bernie found the offending package and they were not to be blamed for the current predicament. If anything, they recognised the toxicity early which most certainly saved Bernie’s life – again.

Bernie didn’t present with any significant findings during consultation. The toxin had been ingested within the hour and Bernie’s owners were able to bring the packet of rat bait with them for identification.

The PVE Emergency Team didn’t have any luck inducing vomiting so charcoal was administered. This is given in a fluid form to absorb any toxins in the stomach before they’re dispersed through the body. The charcoal solidifies and is passed through the digestive tract then excreted via faeces.

Bernie wasn’t showing signs of toxicity so he was discharged for home care with a round of Vitamin K tablets to counteract the effects of the rat bait. His owners were given strict instructions and a check-up with Bernie’s GP was required on Monday morning to ensure his health wasn’t deteriorating.

Rat bait acts as a blood thinner in an effort to decease any animals that consume it. The active agent acts the same as Warfarin adminstered to human heart attack patients. It significantly thins the blood. Vitamin K counteracts this by assisting the blood to clot normally and pets who have consumed rodenticide will find themselves on this supplement for many weeks after ingesting the toxin. Severe presentations will have continually bleeding wounds, with some of the most serious bleeding from orifices such as their nose, tear ducts or anus. If a pet is suspected of ingesting any form of rat bait, they need immediate veterinary attention.

Bernie presented to PVE on a Saturday, so his owners found comfort knowing the PVE team were available 24-hours until his veterinarian opened again if they needed any advice. They were told to monitor for signs of bleeding or lethargy. Thankfully, neither occurred.

If you suspect your pet has ingested any rat bait it is vital you seek immediate veterinary help. It’s also important to note that dogs who chew on or ingest rats that have succumbed to the bait can still be affected if the active ingredient is still present in their body.