The dangers that lurk in your garage

There are various hazards for pets in the home and one is particularly toxic, with few pet owners aware of the danger lurking in their garage. Antifreeze, used in cars, is a toxic liquid that most would be surprised to hear has a sweet taste. There are instances of vehicle antifreeze being consumed by children and animals because of its flavour but be warned, this fluid is very poisonous and there is a very small window of opportunity to treat this toxicity before it results in death.

Antifreeze is found in engine coolant as well as hydraulic brake fluids.

Emergency treatment before transport to a veterinarian

Treatment for antifreeze poisoning needs to commenced as soon as possible for a greater chance of survival. There are no first aid treatments advised.

If you suspect your pet has swallowed antifreeze, seek immediate veterinary help.

What to expect at the vet 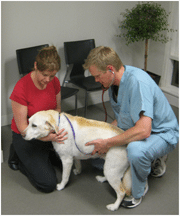 Blood tests to determine the severity of the illness.

Gastric lavage to empty the stomach of toxic contents.

Hospitalisation with close monitoring of your pet’s vital organs (including the heart, stomach and kidneys).

Dialysis in advanced cases with severe damage to the kidneys

Ensure antifreeze is kept well out of reach of pets. While performing vehicle services, it is advisable to keep pets well away from the garage as they will be attracted to the liquid due to its sweet taste.

Ensure your vehicle is not dripping antifreeze. Small amounts dropped on the garage floor and licked by your pet can result in toxicity.

Dispense of all antifreeze waste well. Seal in a tight container and keep out of reach of pets.

On rare occasion, an emergency & critical care veterinarian will say, “I need a bottle of vodka.” The unsuspecting few will think the Vet is having a tough day and needs some light relief but this is not the case.

Antifreeze contains a toxin called ethylene glycol which is very harmful to the kidneys. If left untreated, there is a 100% chance of death. Interestingly, pure alcohol neutralizes the effects of the poison but there is a small window of opportunity. Vodka may seem unconventional but is an alternative to medical strength ethanol and will assist with neutralising the toxin.

Further to the IV of ‘grog’, the patient’s vital signs must be monitored to ensure there are no further issues to their organs or stomach. In the event a patient presents with antifreeze toxicity, they require intensive care where a PVE team monitors them non-stop for any issues that present as a result of this critical treatment plan.