Siberian Husky Has A Stomach Full Of Pebbles

The radiograph that showed surprising results

Kira* the 1 year old Siberian Husky had a ‘gut full’ and visited the team at Perth Vet Emergency for help in June 2016. His owners noticed him vomiting and were surprised to find pebbles and part of a gardening glove. He had a history of eating things he shouldn’t. This included a skipping rope the previous week, so Kira’s owners sought help.

Kira was bright and responsive when he arrived at PVE. His respiratory rate and pulse was normal. His gums were a healthy shade of pink and moist. There were no significant findings or signs of dehydration during Dr Lovatt’s examination. However, he was a little uncomfortable when she examined his abdomen, and given his history of foreign body ingestion, she felt it necessary to investigate this discomfort further.

Kira’s owners consented to radiographs to investigate the discomfort. 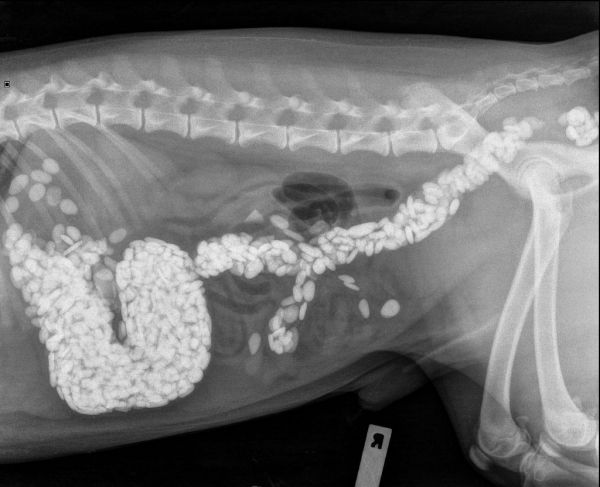 The radiographs presented a large number of garden pebbles in the stomach and colon. Fortunately, there didn’t appear to be an obstruction which meant it was possible for this lucky Husky to pass the pebbles without incident. Kira’s owners preferred the issue be resolved as quickly as possible and didn’t want the stress of waiting for the pebbles to pass at home. As a result, Kira was admitted to hospital where an enema and gastric lavage (flushing the stomach) was performed to force the pebbles out without the need for invasive surgery.

Unfortunately, the procedure only removed a portion of the pebbles – less than 1/4 metric cup. Kira remained in hospital overnight on IV fluids with oral lactulose to encourage the passing of the remaining stones. He was also closely monitored for any signs of obstruction which would require emergency surgery, though this was very unlikely.

On Monday morning, Kira was transferred to his primary care veterinarian for ongoing fluid therapy and monitoring with the wait for more pebbles to pass. He was also monitored for increased abdominal pain, vomiting, or other signs pertaining to gastrointestinal obstruction.

We’re happy to report, Kira was discharged from his veterinarian that afternoon after passing a majority of the pebbles. The few remaining were expected to pass in the following days without concern. We haven’t had any repeat visits since Kira was transferred from our care, which is no doubt a relief for his loving owners. He does however have a very impressive radiograph to remind him of the time he had to visit the emergency team at PVE.

*Kira’s name was changed to protect his and his owner’s privacy.